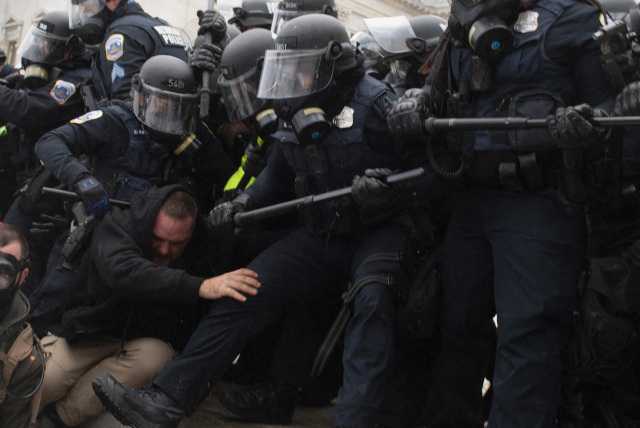 According to the Gateway Pundit, this poor man has been through 5 jails in 50 days before he was finally tossed in solitary confinement for 23-30 hours a day in Washington, D.C. on March 9.

Nichols was honorably discharged from his service in the Marines. He’s now a defendant facing charges related to his alleged participation in the riots that happened both inside and outside the U.S. Capitol on January 6, 2021.

The GP report reveals that on Monday, Nichols appeared before Reagan appointed judge Judge Thomas Hogan in a DC court. During the hearing, the judge, along with Biden’s DOJ, defended the torturous treatment he received and the isolation he had to endure, claiming a concern over the spread of the COVID-19 virus.

“The DOJ and DC court also believes that any talk about a stolen election is forbidden and is being used against the Gulag prisoners. Nichols was seen on Jan. 6 rescuing one police officer. He also participated in some of the violence. For this, he is rotting in prison today,” the GP report revealed.

“On Monday Judge Hogan ordered the release of 3 hours of Capitol surveillance video from inside the west terrace tunnel on January 6. This was the scene of fierce battles between the police and Trump supporters. The police beat the hell out of Trump supporters that day killing two female Trump supporters,” the report continued.

“This is a big development. The Biden DOJ, Liz Cheney, and the Jan. 6 Committee have been using cherry-picked video clips to define what happened on January 6th. They fear the truth getting out to the American public,” the report added.

Will the public finally see police misconduct, brutality and exactly what happened to Victoria White?https://t.co/igPDIJsPHK

We’ve discovered that there is a definite political bias from those who are overseeing the imprisonment of the individuals who are being held for their alleged participation on this so-called “insurrection.”

For example, this report discussed how a DC jail deputy warden had to take down her Twitter account after many vulgar, anti-Trump tweets were discovered and pointed out on her page.

Kathleen Landerkin, who works as the Correctional Training Facility Deputy Warden for the Department of Corrections in the District of Columbia is responsible for overseeing the daily routine operations, inmate transportation, and case management of the DC jail.

A report from WND, Rep. Marjorie Taylor Greene went on to tweet at Landerkin, stating, “You are responsible for human rights violations in the DC Jail and torture and abuse of pre-trial defendants.” “The Georgia Republican who has championed the rights of the Jan. 6 accused shed light on Landerkin’s ideological underpinnings by tweeting out a short but sweet message from last November, ‘F**k everyone who supports Trump,’ sending the deputy warden into damage control mode,” the BizPacReview story said.

Droves of anti-Trump & anti-republican tweets from the Deputy Warden of the DC Jail where all of the protesters from J6 are being held in AWFUL conditions.

@awkathyjo is responsible for GRAVE human rights violations and she must be held accountable immediately.

Here are some of Landerkin’s actual posts via screen capture: As you can see, this woman is very unhinged.

And yet, she’s overseeing how many of the individuals arrested for being part of the Capitol riots are being treated. And folks wonder why these individuals are being so badly treated? This isn’t right. Not at all.