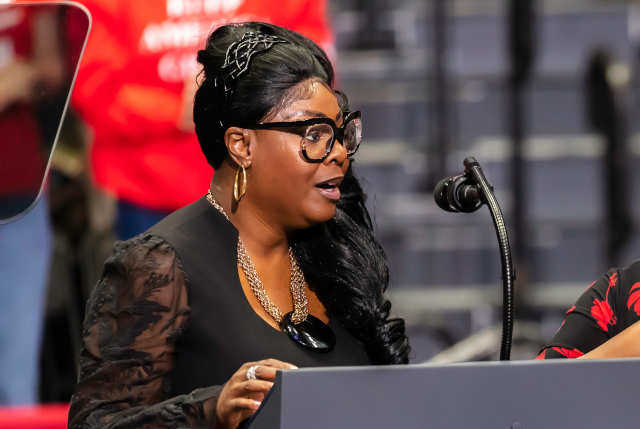 (TeaParty.org Exclusive) – While we don’t really know a whole lot of details concerning the passing of Ineitha Lynnette Hardaway, most famously known as “Diamond” from the popular conservative duo “Diamond and Silk,” her sister, Herneitha “Silk” Rochelle Hardaway, revealed over the weekend at the memorial honoring Diamond’s passing that she, meaning her sister, should be counted among the many who have “died suddenly,” going on to say that “Something ain’t right.”

Kevin Haggerty, reporter for BizPacReview, wrote that a memorial for Diamond was held in Fayetteville, North Carolina celebrating her life and contribution to the liberty movement. The guest of honor was none other than former President Donald Trump. Without pointing fingers at anyone, Silk went on to recall the final moments of her dear sister’s life for those who came to the event saying, “It was sudden, out of nowhere, and no warning,” when Diamond said to her, “I can’t breathe.”

“My husband and I followed the 911 instructions,” she recounted, explaining their efforts to perform CPR until emergency services showed up at the scene, who also “did everything that they could. So what I want to say to everybody is don’t you dare call me a conspiracy theorist because I saw it happen. I saw how it happened. I was there when it happened. And it happened suddenly.”

“I want America to wake up and pay attention,” Silk went on to say during the memorial. “Something ain’t right! It’s time to investigate what’s really going on here and get some answers to why are people falling dead suddenly.”

Silk reveals Diamond died suddenly from what appears to be a blood clot in her lung pic.twitter.com/LnkKOO1NAu

Conservative powerhouse Rep. Marjorie Taylor Greene posted her reaction to Silk’s pleas in a tweet that stated, “I demand an IMMEDIATE investigation into Covid vaccines and the dramatic increase of people dying suddenly! This can no longer be ignored and is NOT political.”

I demand an IMMEDIATE investigation into Covid vaccines and the dramatic increase of people dying suddenly!

This can no longer be ignored and is NOT political. https://t.co/5vOfMFJ57c

Haggerty then noted, “As previously reported, following the death of Diamond, leftist ghouls targeted her past remarks challenging the narrative of COVID shot efficacy and safety and even suggested that a November hospital stint had been a result of being ‘unvaccinated.'”

“Though not specifically dispelling any rumors, Silk took aim at detractors and agenda-driven zealots who refuse to even entertain a possibility outside of their accepted beliefs. ‘Instead of asking if Americans are vaxxed or unvaxxed, the real question to ask is: Are Americans being poisoned?’ she went on to suggest,” according to Haggerty.

“In the wild,” she continued, “when they want to depopulate and sterilize a large group of animals, they usually inject one animal, and then that one animal infects the rest of the animals.”

In the wild, when they want to depopulate and
sterilize a large group of animals, they usually
inJect ONE Animal, and then that one Animal inFect
the rest of the Animals

So technically and according to the science,
it doesn’t matter if you're vaxxed or not. pic.twitter.com/DGzLJwsAxH

While this all sounds extremely dark and depressing, there was also a true celebration of the wonderful life of Diamond, which included some words from Trump at the memorial.

The 45th & 47th President, @realDonaldTrump just hit the stage at the Celebration of Diamond of @DiamondandSilk. Honored to serve a participate in such a beautiful memorial. Silk told me backstage that this is a celebration!!!! pic.twitter.com/S4mgtkRjak

During her time speaking, Silk went on to disclose the heartfelt reaction the former president had concerning her sister’s passing, saying that he told her, “I want you to do whatever you want. I want you to have the best of whatever you want, and whatever you want Diamond will have. And I don’t want you to worry about paying for nothing. That’s what this man did for my sister. He didn’t waver, he didn’t think about it, he said, ‘you know what, I gotta be there.’”

Trump is not the bad guy that so many in the media make him out to be. Edgy and forward? Yes. But those aren’t bad traits. He just speaks his mind and seeks to do the best he can for the country. That’s more than what we have gotten out of any leader this nation has had in a very, very long time.

Silk reveals President Trump told her to do whatever she wanted for Diamond’s memorial service and he would pay every cent for it pic.twitter.com/pbKdCg17ox