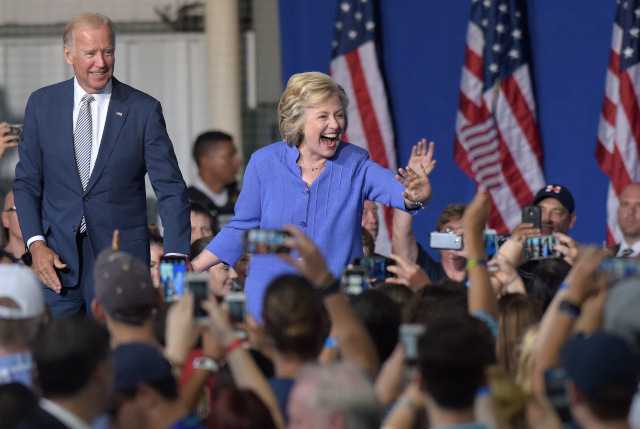 (TeaParty.org Exclusive) – A brand new report from WND has revealed that two Democrat operatives have suggested in a recent commentary that twice-failed Democratic presidential candidate and former secretary of state Hillary Clinton is the Democratic Party’s “best option” for 2024.

Boy, if that’s true, the Democratic Party is in very, very bad shape. We’re talking on life support here. Apparently, these two individuals were checked out of reality when the 2016 election happened and Clinton was trounced by Donald Trump.

A report from the Daily Mail explained that the claim from both Douglas E. Schoen and Andrew Stein comes after Clinton’s most recent activity that has sparked a number of “2024 rumors” due to what has been said during a series of television interviews over the course of the few weeks.

During some of these TV appearances, Clinton has taken a few swings at Joe Biden and his administration, along with making a few suggestions for the party to stop moving to extremes, otherwise they risk alienating voters before the midterms later this year.

The report went on to say, “Just a year into Joe Biden’s presidency, his and Kamala Harris’ low popularity and back-to-back domestic and foreign crises has Democrats searching for a viable presidential candidate.”

The commentary then pointed out, “Given the likelihood that Democrats will lose control of Congress in 2022, we can anticipate that Mrs. Clinton will begin shortly after the midterms to position herself as an experienced candidate capable of leading Democrats on a new and more successful path.”

“Of course, she’s been first lady, a U.S. senator and secretary of state. She’s also known for her 2016 campaign that created – apparently using Russian disinformation – the now-debunked claims of President Donald Trump’s campaign ‘collusion’ with Russia,” the WND report stated.

The piece published by the mail said, “It’s typically unusual for political operatives to start seeking potential candidates for the next election, especially so far out of the administration, when a member of their own party controls the White House already. It is also rare for an incumbent president to face a serious primary challenge.”

“But if Biden clinched another term in the White House he would be 81 years old when he was sworn in, a record for the oldest person to take office. Doubts over his fitness for office at an advanced age coupled with approval ratings that have been in the low 40s since October have served to dim his chances,” the story continued.

The report noted that Harris is no better.

However, one supporter on the far-left is already stepping up to the plate to try and destroy any idea of a return for Clinton.

“An analysis by Chris Cillizza at CNN pointed at the opinion from Schoen, a pollster, and Stein, a former New York City council president,” WND reported.

Cillizza then noted that while Clinton certainly has experience, some of the points on her resume didn’t do much to help her back in 2008 and 2016 when she failed to win the White House.

He then continued to explain that the idea she could be a “change candidate” is born out of “absolutely no scenario I can imagine.”

“Her background is simply too Washington (and politics) heavy. Plus, Schoen and Stein just got done arguing that Clinton has the right experience for the job. So, how could she run as the experience candidate and the change agent?” Cillizza said.

He then commented on her supposed “signals” for running in 2024, calling it “pretty thin gruel.”

“The Daily Mail pointed out Biden already has on his record issues like the catastrophic Afghanistan withdrawal. And soaring inflation. And the COVID pandemic. There’s also the southern border, and many more,” the report noted.

“Democrats’ unpopularity as the majority party in Washington puts them on track to lose the midterms, according to multiple projections,” the report added.

Clinton herself has gone on to state that with the poor popularity of both the president and vice president, Trump is likely to be back on the ballot for 2024.

Joe Concha penned a piece for The Hill saying, “Hillary Clinton always seemed to believe the mantle of ‘First Female President’ was her birthright. And given how pathetic the field is on the Democratic side with or without Joe Biden, she may just get a second chance at winning the office her husband so famously made infamous.”

A columnist who writes for the New York Times said in an interview with Fox News that the former first lady is practically begging to be the one.

Miranda Devine went on to explain, “I think it tells you more about the state of the Democratic Party than it does about poor America, that they are even considering Hillary Clinton, that she isn’t just being laughed out of school for popping her head up above the parapet, from so desperately and so obviously having her hand up and saying ‘pick me, take me!'”

“The master class, so-called, that she gave the other day that people pay $20 a month to watch, in which she read her undelivered victory speech and then cried at the end of it with no real tears, that was her begging the American people and begging the Democratic Party to look at her as the alternative to Joe Biden, because after all, she is younger than him,” she continued.

She then said, “It’s going to be a nightmare. And really, the subtext is that only Hillary Clinton, who was so narrowly cheated of victory against Donald Trump in 2016, only she can save America. And that is her shtick. She won’t stop – she will do it until her last breath, she wants to vindicate herself.”

“Possibly throwing a wrench in that agenda is a Washington Examiner report that special counsel John Durham told a federal court he is looking at members of Clinton’s 2016 presidential campaign as part of his criminal inquiry into the origins and conduct of the Trump-Russia investigation,” the WND report said.

“Durham’s team asked a judge to ‘inquire into a potential conflict of interest’ related to the lawyers for British ex-spy Christopher Steele’s main anti-Trump dossier source, noting that a separate lawyer at their firm ‘is currently representing the 2016 ‘Hillary for America’ presidential campaign,’ as well as multiple former employees of that campaign, in matters before the Special Counsel,” the WE report stated.

For the first time, @HillaryClinton is sharing the speech she would have made if she had won the 2016 presidential election. Watch more of the conversation on #SundayTODAY with @WillieGeist. pic.twitter.com/iRLbKUGINc

@HillaryClinton You are a shadow leader in service of evil. You are the enemy of what is good, right and moral. You represent no flag, no country, no soul. You eat hope, you twist minds. I’ve been in a hotel room with your husband and here comes the bomb. https://t.co/K3ZDQYBXPn

Hillary just needs to accept reality. Nobody trusts her. Nobody likes her. Her desperate dreams of becoming the first female president are not likely to become a reality. It’s time to move on already.