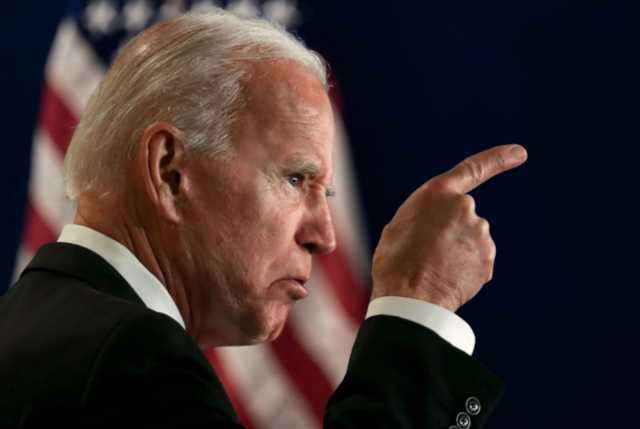 (TeaParty.org Exclusive) – Joe Biden, the man who is supposed to be the president of our country, a position which is supposed to be dedicated to enforcing the Constitution and ensuring the rights of Americans are protected, along with keeping our nation safe from threats from both within and from without, gave a speech last week that did the exact opposite of all the duties the office calls for.

The speech, which has now become infamous, featured Biden calling those who support former President Donald Trump “enemies of the state,” referring to such individuals, both in Congress and out, as insurrectionists. The speech was angry, hateful, and designed to further divide the country along political lines, painting up conservatives as “the other,” a group of violent extremists who cannot be allowed to express their point of view because it goes against the worldview adopted by the current regime.

But what really added to the creepy factor of Biden’s spiel was the red background behind him, his mannerisms while speaking, and the fact he had Marines up on stage with him. It looked as totalitarian as one can get.

This is a point that, according to The Jerusalem Post, Congresswoman Marjorie Taylor Greene, a Republican from Georgia and a big fan of Trump, picked up on immediately. In fact, she shared a video last Friday on Twitter that features a deepfake of the speech where Biden’s head was removed and replaced with Adolf Hitler. It was a powerful way to make a point.

Some folks are no doubt going to be super, super offended. The real question in response to that outrage is should we really care? I say no. We have been called Nazis and had our own conservative leaders compared to Hitler on a regular basis, despite the fact that what actual, real Nazis believed is pretty much the exact set of ideals and principles the left holds to, an inconvenient truth liberals have been trying to duck for a while now.

“Anti-Defamation League Midwest Board Member Bradley Dlatt tweeted in response that Greene ‘should be expelled from Congress for this. Co-opting the imagery of a regime that murdered millions of Jews and other minorities is dangerous, highly offensive, ignorant, and wrong. This should be the end for MTG’s career,'” the JP post said.

I don't say this lightly: @RepMTG should be expelled from Congress for this. Co-opting the imagery of a regime that murdered millions of Jews and other minorities is dangerous, highly offensive, ignorant, and wrong. This should be the end for MTG's career.

It’s called freedom of speech, Dlatt. It’s in the First Amendment, which is part of the Constitution. You know, the document that forms not only the basis of our government, but our society and culture as well? Yeah. It says this can absolutely be used. Where was the Anti-Defamation League with all of this outrage when Trump was being slandered as a racist and Nazi? How often did leftists use this sort of imagery to defame the former president without being taken to the woodshed by the ADL? Be consistent in the application of your principles.

Greene has strong thoughts and opinions, which are all protected under the First Amendment. Sure, Twitter can remove those posts if they wish, but she cannot be expelled as an elected official for making political speech. This is a no brainer.

They chose this imagery. It’s unreal.

“This is not the first time that Greene has called for Biden’s impeachment on social media. Last year, she introduced a bill against Biden for ‘for abuse of power by enabling bribery and other high crimes and misdemeanors,'” the JP report said.

The following day after the speech, Biden appeared to walk back his statement by saying, “I don’t consider any Trump supporter to be a threat to the country.”

He then said, “I do think anyone who calls for the use of violence, who fails to condemn violence when it’s used, and refuses to acknowledge that an election has been won, insists on changing the way in which the rules, you count the votes, that is a threat to democracy.”

The president then went on to say that Trump voters weren’t “voting for attacking the Capitol. They weren’t voting for overruling elections.”

But that’s not really what he was implying the night before, was it? No, he allowed his true feelings to shine through in that speech. The walking back of the statements he made that night is an attempt at damage control.

The current administration seems to be hellbent in following in the footsteps of the Third Reich, whether they realize that’s what they are doing or not. Hitler used the government and the various agencies he established as weapons to take out political enemies and attack anyone who dared to speak out against his agenda and ideology.

The Biden administration has been practicing the same things as of late. Like the FBI raid on Mar-a-Lago for example. Not only did the FBI, weaponized by left-wingers in the government, come to Trump’s house in what could potentially be a political attack to somehow prevent him from running in 2024 or to do damage to Republicans ahead of the midterm elections in November, but they apparently targeted Trump’s son, Barron too, by ransacking his room.

“[J]ust a few weeks ago, you saw when we witnessed one of the most shocking abuses of power by any administration in American history: the shameful raid and break-in of my home, Mar-a-Lago. [It] was a travesty of justice that made a mockery of America’s laws, traditions, and principles before the entire world,” Trump said during a rally on Saturday in Pennsylvania, according to BizPacReview.

He added, “The Biden administration invaded the home of their chief political opponent who is absolutely destroying him and everyone else in the polls … on a phony pretext, getting permission from a highly political magistrate who they hand-picked late in the evening, just days before the break-in, and trampled upon my rights and civil liberties as if our country, that we love so much, were a third world nation.”

“They rifled through the first lady’s closet drawers and everything else, and even did a deep and ugly search of the room of my 16-year-old son, leaving everything they touched in far different conditions than it was when they started. Can you believe it?” he asked the crowd.

“The FBI and the Justice Department have become vicious monsters, controlled by radical left scoundrels, lawyers, and the media who tell them what to do and when to do it,” Trump said. With all of this being added in with Biden’s speech, I think a comparison of him to Hitler and his administration to the Third Reich seems fair.